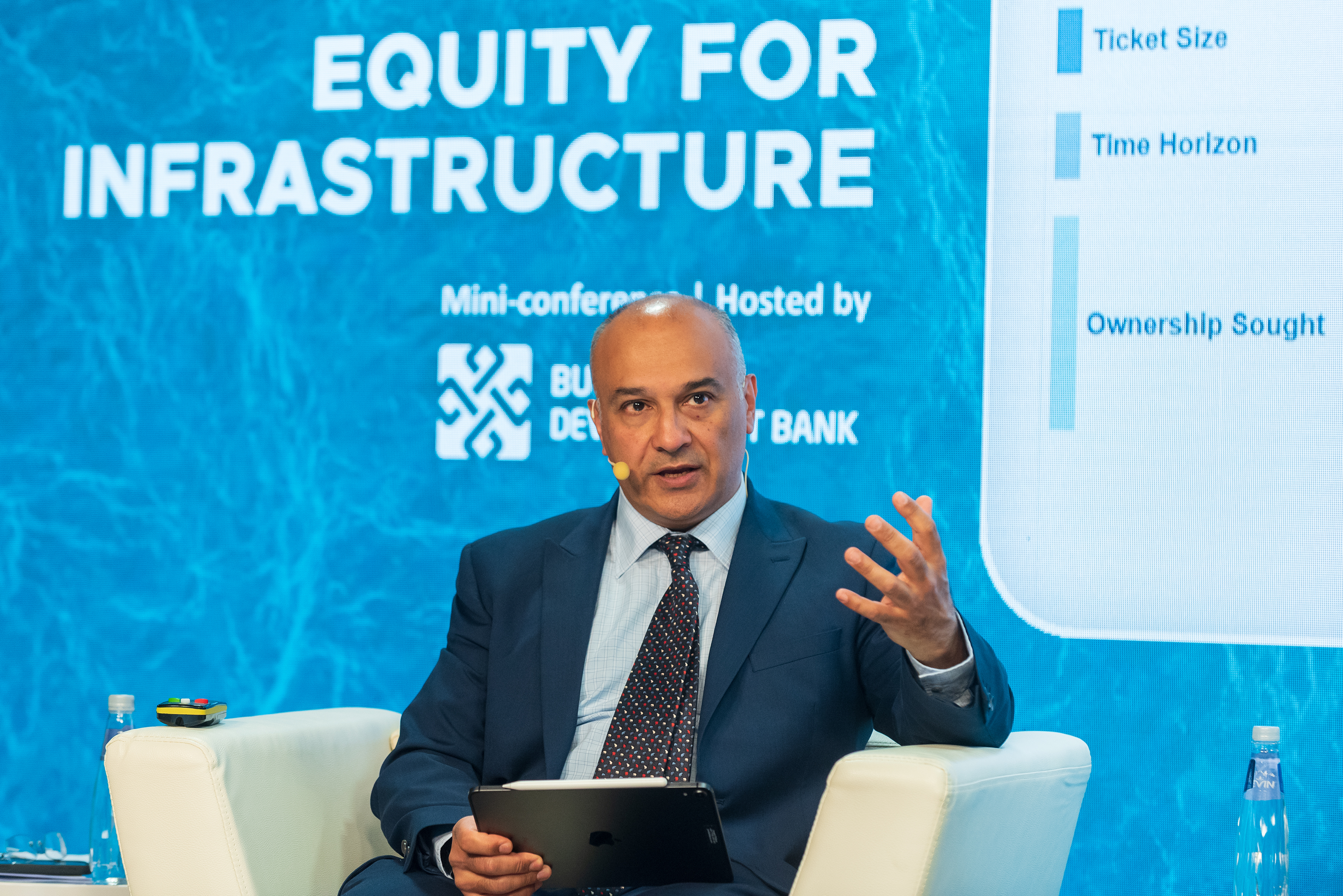 The Three Seas Initiative is not a revived dream of the Bulgarian nationalists, but a geopolitical initiative of the countries of the Black, Adriatic and Baltic Sea region. It was launched in 2016 at a summit held on a presidential level in Dubrovnik and was attended by 12 countries: Austria, Bulgaria, Croatia, the Czech Republic, Estonia, Hungary, Latvia, Lithuania, Poland, Romania, Slovakia, and Slovenia.

The Three Seas Initiative Investment Fund (3SIIF) is an instrument for capital investment in key infrastructure projects in the region between the said three seas.

The Fund targets investments in transport, energy and digital infrastructure along the north-south axis in order to compensate for the differences in the development of the region compared to the western part of the EU. Its role is to complement the available European, national or private resources in the countries of the region.

The Fund is based on commercial and market principles and should provide adequate returns for investors. It invest directly in minority or majority interests in new or existing companies, indirectly through investment holding companies and/or special purpose vehicles established in the EU.

On September 2, 2020, the Council of Ministers decided that the Bulgarian Development Bank should participate in the Investment Fund with EUR 20 million from the Bank's own funds.

Tell us about the Three Seas Initiative and the Fund. How is it structured and who are the main shareholders at the moment?

The 3SIIF is something that was born from the Three Seas Initiative. The Fund has equity for infrastructure projects in the energy, transport and digital sectors. The first two founders were BGK, the Polish Development Bank, and Exim, Romania, with seven more development banks subsequently joining as investors. So today, nine of the Initiative's countries are participating in the Fund. The other two that are not yet participating are Slovakia and the Czech Republic. Technically, Austria is a participant, too, but has not yet invested either. There is still debate as to whether there are 11 or 12 countries, but 9 of the 11 are participating.

What is the size of the Bulgarian participation?

How do you plan to increase your capital until you reach your target of EUR 5 billion?

The Fund currently has a capital of EUR 930 million, which was raised in the last 12 months since the end of February 2020. The target is between 3 and 5 billion euros. We hope that the last two of the 11 countries will also invest soon. The Three Seas Initiative is one of the few infrastructure investment options other than the EU funds

We are currently in talks with several international development financial institutions, such as the US International Development Finance Corporation. A $300 million investment in the Fund has been approved, but has not yet happened. Then we hope to also attract private capital, equity funds, pension funds, etc., knocking on doors and presenting the Fund to these investors. What we can be convincing with are our three investments, which we made in the first year, investing EUR 440 million in capital. So, if they want to invest in the Fund, it will be invested relatively quickly in high quality projects.

Can you say a little more about the two announced projects and about the third one as well?

We have completed two investments that have been announced. In a few days we will make an announcement for the third one. These are investments in renewable sources. Our first investment was in the Polish Cargounit, the largest locomotive leasing business in Poland. The reason for making this investment is that there is a huge public capital at а national level and from EU funds used for railway and signaling. However, if you want to upgrade the railway and signaling and move freight from the highway to the railway, you need to upgrade the locomotives in order for them to be more efficient and environmentally friendly and to be able to cross borders. There are huge requirements for new locomotives in the cargo sector and we acquired Cargounit with the intention of modernizing its fleet of locomotives, which are over 40 years old. (The second investment is in the Estonian Greenergy Data Centers, editor’s note).

In Bulgaria, transport projects are run by state-owned companies. Can both private and public companies apply with a project?

All can apply. We are a private equity fund. If someone meets our investment criteria, whether a public or private company, they can contact us to discuss investing.

Do you already have any offers from Bulgarian companies?

Yes, there are several priority projects that the Bulgarian government has proposed, one of which is the Chiren gas storage facility, and we have started talks on this project. There are also private companies. We are currently discussing with them projects in the transport sector. One is for the construction of a port, and the other is for the acquisition of an existing port.

Would you finance a project like the highway between Burgas and Varna?

It depends on how the government wants to formulate the project. If it's like a public-private partnership or a concession, it could happen. But we have not met with the team in charge, so we have no idea what they intend to do. There is no reason why it cannot be financed, as well as other road projects.

Still no proposals from the Bulgarian Railway Infrastructure Company?

Not yet. But we were in a pandemic and this is our first opportunity to come to Sofia. I will be very surprised if we do not receive a significant amount of emails and calls after today.

How will your projects be combined with those under the EU programs?

Nothing stops us from being involved in a project that is partly funded by the EU.

Corruption is a very topical issue in the country. Tenders are won by certain companies, projects are delayed, there are risks of losing funding, etc. How will you deal with these local practices?

We are very careful in the due diligence of the company we intend to invest in, its shareholders and management. We choose high quality consultants in Bulgaria, lawyers, financial advisers, etc.

The reality is that corruption is not everywhere. There are companies and individuals in Bulgaria banks are very happy to give money to because they are quality partners. The case is not that it is impossible, we just have to do a lot of research. We are very careful.

Can you tell us in particular what the financial parameters and financing will be?

The minimum is € 50 million, but we can make smaller investments for two reasons. First, in smaller countries. The Fund was created to build a geographically diverse portfolio, so € 50 million is the minimum in all countries, which may not be possible as there are large differences in the size of economies. The maximum is € 250 million, which is determined by the size of the Fund: if it increases, this figure may change.

BDB participates with € 20 million, how will you balance between large and small donors to ensure the interests of the larger contributors?

We are not required to make investments depending on the contribution of the shareholders and countries. Nothing can stop us from making an investment of €250 million in Bulgaria, if this is the right investment. All we have to do is build a geographically diverse portfolio.

How are you better than other opportunities to obtain funding?

It depends on the country. When it comes to equity capital, I do not know how much is available in Bulgaria. It is not much.

If you want capital for infrastructure, at the moment the Three Seas Initiative Fund is one of the few options. There are many options in Poland. The team has a lot of experience. For example, in Estonia, we not only invested money in the data center, but also brought people. When we bought Cargounit, we also financed the entire debt.

Our other area of expertise is debt capital structuring. It depends on what the options are. European money is free, but if it is not available and there is no other available capital and there is a project with potential, then private capital is always an option. Moreover, the fund cannot be defocused to other geographical locations. We will not suddenly turn around and invest in Germany because we cannot. We can only invest in this region.

States often have different interests and it is difficult to build large international projects. How will you cope?

As we say, the Fund is politically inspired, but commercially driven. It is designed so that investment decisions are made entirely on a business basis by management and a committee and there is no political influence where to invest. All investments so far have been made independently by the shareholders. If we want to attract private capital it must be this way. Private capital will not invest if there is any political influence.

Joe Phillips has over 30 years of experience in infrastructure investments and has had a leading role in some of Europe's largest infrastructure projects. At the London-based Amber Infrastructure, he has been responsible for the creation of the Investment Fund for the Three Seas Initiative. Before joining Amber in 2020, he was with Dalmore Capital since 2014. Phillips completed their successful bid to fund the £4.2 billion Tideway Tunnel. He was the director of the holding company of the tunnel. In March 2017, he completed Dalmore’s £400 million investment in Cadent Gas as part of a consortium, among other projects.